The 10 Best Cities for LGBTQ Seniors to Retire In

Retirement is a time to spread your wings, enjoy your passions, travel, discover new possibilities, and spend more time with family and friends. It can even mean making a move to a vibrant new city or state. 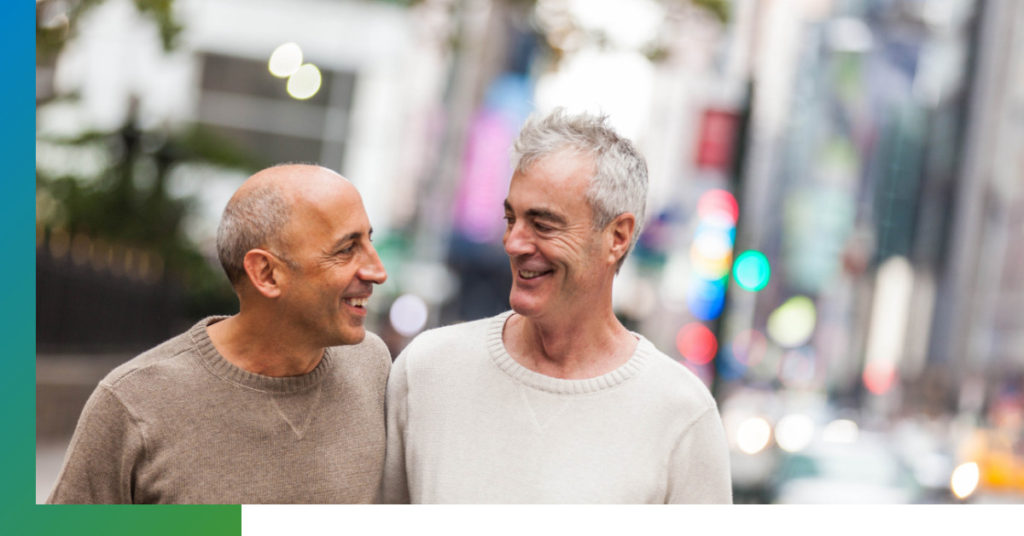 Retirement is a time to spread your wings, enjoy your passions, travel, discover new possibilities, and spend more time with family and friends. It can even mean making a move to a vibrant new city or state. For many, the thought of moving in their golden years is exciting, and their options are wide open.

However, seniors who identify as LGBTQ need to be more discerning when weighing options for a new retirement locale. Some cities, frankly, are not as progressive or gay-friendly as others.

Recently, SeniorAdvice.com, a top senior housing referral service, published their annual ranking of the best LGBTQ places to retire in the U.S. The best cities for LGBTQ seniors were chosen based on more than 100 factors, including the percentage of LGBTQ residents, the city’s score according to the Human Rights Campaign Municipal Equality Index (HRCME), LGBTQ Chamber of Commerce presence, the number of LGBT-friendly retirement communities, local and state legislation, cost of living, and their SeniorScore.

With that in mind, below are the top 10 best LGBTQ places to retire.

Since long before the Civil War, New Orleans has been a popular haven for the LGBTQ community. On both sides of the Mississippi River, you’ll find LGBTQ-friendly neighborhoods offering an open, relaxed and affordable way of life. There are year-round LGBTQ events such as the Gay Easter Parade, Southern Decadence, and the Saints and Sinners LGBTQ Literary Festival. It’s also hard to top its music and cuisine scene.

Just over 5% of the city’s population identifies as LGBTQ, one of the largest percentages for any American city. As advocates for the older adult LGBTQ community, NOAGE was established to ensure that LGBTQ seniors live their best lives with dignity, respect and good health. There’s also a city ordinance prohibiting discrimination based on sexual orientation and gender identity.

Compared to other U.S. cities, the cost of living and the cost of senior living facilities, including LGBTQ-friendly retirement communities, are below national averages.

West Palm Beach is home to year-round sunshine and over 40 miles of pristine, sandy-white beaches along Florida’s Atlantic coast. The downtown area is home to four distinct districts that buzz with activity, including fine dining, music and theater, art museums, unique festivals, and plenty of shopping, including the popular Antique Row in its Arts and Design District.

The city’s significant LGBTQ legislation has opened the door for other U.S. cities with their demonstration of support and policies protecting their LGBTQ community. West Palm Beach earned a perfect score on the HRCME index, and several elected city and county officials are openly gay.

The senior population of Palm Beach County is nearly 24%, and the LGBTQ population of West Palm Beach is near 5%. Their SeniorScore is 74, which is higher than the national average. However, the overall cost of living is very high.

With its affordability and constant sunshine, Tucson, Arizona, is one of the fastest-growing retirement destinations in the nation. With over 13% of the city’s population ages 65 and older and a general LGBTQ state population of 5%, many find Tucson to be one of the best cities for LGBTQ seniors.

Tucson offers a unique mix of dining and shopping options, historical and cultural attractions, and an abundance of year-round outdoor activities to enjoy.

For the past several years, Tucson has had a perfect score on the HRCME index. In 1999, it was the first Arizona city to pass an antidiscrimination ordinance protecting lesbian, gay, bisexual and transgender residents and city workers. The University of Arizona in Tucson set the bar for other U.S. universities by offering The Institute for Lesbian, Gay, Bisexual, and Transgender Studies, one of the first of its kind.Tucson’s SeniorScore is higher than the national average and there are more than 25 retirement communities in the area, many offering LGBTQ senior care.

Toledo, Ohio? Yes, Toledo! With home prices well below the national average, thousands of acres of metro parks, and a perfect score on the HRCME index, this diverse northern Ohio city has become a popular place for LGBTQ seniors.

Set on the mouth of the Maumee River, Toledo has a lot to offer — savory dining, theater and musical events, and a variety of sports attractions. The city’s also known for its art and culture, including the nationally recognized Toledo Museum of Art.

Toledo’s gone to great lengths to become gay-friendly. They have a ban on conversion therapy, a domestic partner registry, antidiscrimination protections, and many employers offer same-sex partner benefits. Also, Toledo’s overall cost of living is lower than other major cities in Ohio and the U.S.

Located along the Potomac River a few miles south of Washington, D.C., Alexandria is considered a cultural U.S. hotspot. You can enjoy practically any type of dining, shopping, cultural, historical, sport or recreational experience you can imagine, and its excellent transit system will get you there

The metro area, which includes our nation’s capital and Arlington, Virginia, has an LGBTQ population around 4% and a senior population of 13%, which is average among major U.S. cities. The overall cost of living is very high compared to national averages, but there are over 175 area senior living facilities, including LGBTQ senior communities and specialized senior wellness centers.

Sunny Tempe, just a few miles east of Phoenix, is one of the country’s largest suburban areas and offers all the amenities of big city and small-town living — shopping, dining, fine art galleries, museums, festivals, music and theater. With beautiful mountain vistas and arid desert plains, it’s great for hikers and bikers. Tempe also celebrates gay pride with Phoenix Pride every May.

Tempe is an extremely inclusive city and has scored a perfect 100 on the HRCME index each of the last five years. In 2014, the Tempe City Council established protections for LGBTQ individuals from discrimination at home, work and in public spaces.

Tempe’s senior population is nearly 10%, with a statewide LGBTQ population around 5%. While senior living community and home health care costs are average compared to national levels, the overall cost of living is high.

Coined the “Gay Capital City of Florida”, Fort Lauderdale is a favorite among LGBTQ locals and visitors alike. An hour north of Miami, Fort Lauderdale boasts 23 miles of sandy Atlantic coastline, including many gay-specific beaches.

Fort Lauderdale has a lot to offer the LGBTQ community beyond sunny beaches and resorts. Just north of the city is the welcoming community of Wilton Manors, one of South Florida’s most famous gayborhoods. Wilton Manors combines a small-town atmosphere with all the amenities of urban life, including many gay-friendly businesses, bars and restaurants.

Austin is a diverse, liberal oasis in an otherwise politically conservative state and welcoming to all. But what would you expect from a city whose motto is “Keep Austin Weird”? Austin’s famous for its music and burgeoning foodie scene. It also stands out for its warm weather, friendly residents, low crime rate, recreational activities, gay-owned businesses, and the annual gay pride festival and parade.

Austin continually advocates for the LGBTQ community. In 2017, the city council formed the Lesbian, Gay, Bisexual, Transgender and Queer Quality of Life Advisory Commission to enhance government accountability and advise on issues regarding the LGBTQ community.

Austin’s cost of living is average, and Texas has no state income tax. It has over 100 area senior living facilities, including LGBTQ-friendly senior communities.

Located in southwestern Ohio on the banks of the Miami River, Dayton is the hometown of Orville and Wilbur Wright and is home to the National Museum of the U.S. Air Force and the National Aviation Hall of Fame. But Dayton is so much more than aviation.

Dayton has a vibrant performing arts scene and a charming revamped downtown full of coffee shops, restaurants, and an eclectic mix of bars, breweries and wineries. It’s great for outdoor lovers with over 300 miles of paved trails, dozens of golf courses and plenty of metro parks. You’ll also find several historic neighborhoods that appeal to residents of all backgrounds.

Many organizations cater to the senior LGBTQ senior community, and Dayton has a perfect score on the HRCME Index. It has a ban on conversion therapy and a nondiscrimination ordinance based on sexual orientation and gender identity.

Metro Tampa Bay is a diverse, inclusive, senior-dense region and encompasses Tampa, St. Petersburg and Clearwater. Tampa has some of the best beaches in the country and has long been a welcoming place for LGBTQ seniors.

The area offers big-city amenities, including a vibrant restaurant scene, great shopping, world-class museums, arts and culture. It’s also home to many LGBTQ venues, businesses and events, including the Tampa Bay International Gay and Lesbian Film Festival and the largest LGBTQ pride festival in the state.

Tampa also enacted anti discrimination ordinances, banned conversion therapy, and owns a perfect score on the HRCME index. The LGBTQ population is approximately 6%, one of the highest in the nation, and the entire senior population is just over 12%. There’s no state income tax, and the overall cost of living is low. You’ll also find affordable senior living communities offering LGBTQ senior care.

There are several other U.S. cities recognized for their inclusivity and support of the LGBTQ community such as Boulder, Colorado; Albuquerque, New Mexico; Asheville, North Carolina; Eugene, Oregon; and Santa Ana, California. Also, Life Care Services® offers more than 130 LGBTQ-friendly retirement communities nationwide, many of which are located in or near the areas listed above. To find an LCS community near you or in an area where you’d love to retire, use our Community Locator Tool.